TV Shows »Flight of the Conchords I’m pretty late getting caught up with the charming musical comedy series Flight of the Conchords, but HBO Go has allowed me to watch all the episodes I missed.

I didn’t realize it lasted only two seasons, and was a little crestfallen when the I played the finale.

Kiwis Jermaine and Bret are lovable, but I might just adore their manager Murray the most.

Sometimes comedian musical interludes can fall flat but here the songs are witty and catchy mimicking everything from modern R&B to David Bowie. There are several songs I would happily listen to in all seriousness.

If you too missed this gem the first time around, it’s great fun summertime viewing. Trying to cash in on the success of Grease and Rocky Horror, the makers of The Apple weren’t terribly ambitious with production values. Their future is one of hologram stickers and aluminum foil but their expectations of how the world would change by 1994 (!) were ambitious indeed. Surprisingly, we are not all being controlled by the devil with holograms and pop music… or are we??

A totally eye popping crazy thing, The Apple is worth at least one viewing in your life. The Adam and Eve parable that could only be described as both dumb and fascinting has become a bit of a cult classic, though to be perfectly honest, it wears a little thin after about an hour.

But just know that between the seemingly unending weepy songs there is a simulated sex dance that looks like it takes place in a Sleepy’s in heaven and a floating car in the sky that abruptly ends everything (though not in quite as cool a way as it does in Repo Man).

Trashy fun, this gem can be seen on Netflix streaming and even if the plot lacks a bit, some of the songs are undeniably catchy. Plus there’s ton’s of latex jumpsuits, see through rain coats, studded everything, and diamond encrusted grills.

It has the dubious distinction of being one of the few movie musicals not made into a live musical. Seems about time to change that, no? The Golddiggers of 1933 is our gold standard for golden era musicals, and while Footlight Parade doesn’t quit reach the magnificence of that film, it’s an engaging fun romp. Bolstered by an uber charming cast, all of which you notice made other categories this week including a fast talking, lithe dancing James Cagney, the wide eyed sass with a good head on her shoulders, Joan Blondell, the ultimate “juvenile” and nice guy Dick Powell, and the petite sweetheart Ruby Keeler.

Of course, the real centerpiece of are the over the top Busby Berkeley musical numbers that among other wonders include: men and women dressed as giant cats, a waterfall full of lady godivas, a hotel where women get busy on their wedding nights, an opium den populated by women in incredible costumes, and that man/child thing dressed as a mouse.

The film moves along at a breakneck pace, it’s at least twenty minutes before there’s even a pause between action and dialogue. The plot, that rushes by you, involves the arrival of “talkies” which pushes musical producer Cagney into the new business of creating live performance “prologues” for the new fangled movie theaters. It’s all a build up to the back to back musical numbers though. 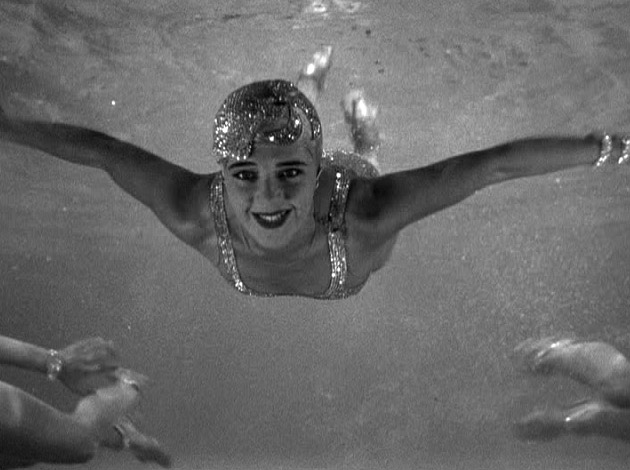 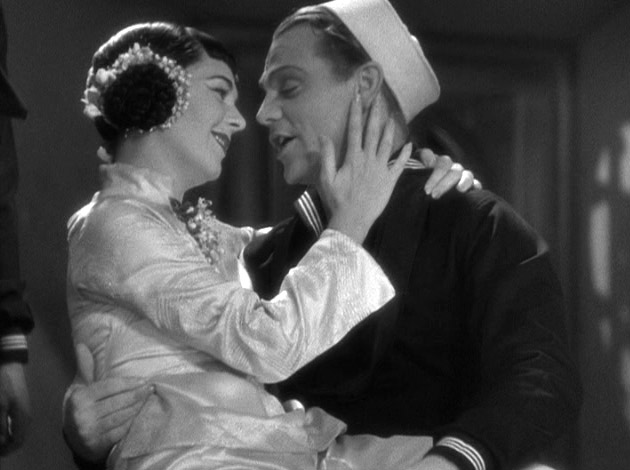 END_OF_DOCUMENT_TOKEN_TO_BE_REPLACED

Here's what I said way back on December 15th:

Gold Diggers of 1933 is a classic musical with a goofy, funny charm anchored by several lavish Busby Berkeley numbers and a lively story. The film opens on Gingers Rogers's beaming face as she sings “We're in the Money” while a trail of chorus girls in tiny coin costumes tap dance behind her. The irony (we quickly discover when the rehearsal gets shut down by the coppers) is that no one is really in the money at all – it's the Depression, darling, and Barney, the show's producer, hasn't paid his bills.

This leaves our four little actresses: innocent Polly (Ruby Keeler), sultry Fay (Rogers), sassy Carol (Joan Blondell), and the magnificently named Trixie Lorraine (Aline MacMahon) who's wise and funny (she remarks to a portly dance partner, “Why, you're as light as a heifer,”) out of work until Barney can come up with the money for a new show. Enter Dick Powell as Brad Roberts, the seemingly hard up neighbor and songwriter who comes to their rescue. But how? Did he rob a bank to impress his sweetheart, Polly? Or is there some other secret he's been hiding?

We find out soon enough (though I won't spoil it for you here), but the story roller-coasters through mistaken identity, star crossed love affairs, and more than one topsy turvy romance. Chorus girls and high society men mix even though the upper class considers our heroines to be “parasites”, “chiselers”, and “gold diggers”. While much of the story, despite its considerable age, is still relevant and surprisingly fresh, humorously enough the one bit of life that's changed the most is high society's aversion to fame and entertainment. Nowadays the rich can't wait to be splashed all over TV and date celebrities.

Also, even in a Depression, the clothing is spectacular here – even a “bad dress” sports amazing sleeve details and tailoring, while more fun frocks (particularly worn by the statuesque Blondell) are wild and stunning. In one scene two of the girls, in a ruse to fool a couple of Boston high society men, insist on new adorable hats and refuse to leave the apartment with out corsages – corsages, I might add that sit prettily atop fur stoles at lavish night clubs.

The cast is wonderful and I was particularly taken with Warren William's leading man snob (see this week's hunk), but the musical numbers are the real show stealers. The first, “Petting in the Park” features: kissing monkeys, dapper singing cops, roller-skating girls, a freaky man-baby on roller-skates, an on-stage blizzard and rainstorms, a strip tease in silhouette, innumerable garter belts, and bathing suits made of tin!

Another number “The Shadow Waltz” is kind of a boring song, but it's saved by discus skirts and neon violins! The final number, “Remember My Forgotten Man” is the best song and Joan Blondell's spoken lament reminds us of the actual pains the Depression brought so many.

This popular film spawned three sequels that I haven't seen yet.

RUNNERS UP:
Happy Go Lucky
The Room
Aguirre: The Wrath of God
Inglourious Basterds
Anvil: The Story of Anvil
The Bitter Tears of Petra Von Kant

It's really quite curious that I've never recommended the True Stories soundtrack, because it's been a staple of listening pleasure for me for eons. As I've recounted to you before, the movie itself is spectacular and smile inducing and the music, released with Talking Heads songs is just as uplifting.

Byrne initially intended to release an original cast recording containing the songs as they're heard in the film, sung by actors like John Goodman, Swoosie Kurtz and the late, great Pops Staples but at the last minute DB reconsidered and Talking Heads re-recorded the tracks (a move Byrne later lived to regret); though if you get a recent remaster, you'll at least get the Pops Staples and Tito Larriva vocal mixes.

Music video hits like Wild Wild Life and Love for Sale made this pseudo-soundtrack to a pretty obscure film relatively popular and successful but the entire album is golden, not just the familiar songs. Papa Legba, Dream Operator, and City of Dreams are some of my particular favorites.

TV Shows »Flight of the Concords

Flight of the Conchords is a mild mannered, good-natured kiwi take on the increasingly popular novelty song duo comedy genre, so recently taken to extraordinary heights by The Mighty Boosh. Jemaine and Bret are super charming protagonists and get great support from a cast of lovable oddballs: Murray, their ginger-balled band manager being my favorite; creepy/cutesy stalker Mel, a criminally underused Eugene Mirman and Thoroughly Modern Millie as Brett's girlfriend are also noteworthy.

I have to say, I liked the show a lot it premiered on HBO a couple of years ago, but I think The Boosh has spoiled me since and when Netflix sent season one last week it took a little while for me to fall under its milder, subtler spell – but it did win me over and I find myself just feeling nice when I think of the hours I've spent with the boys.

The musical numbers themselves are pretty great too – whether it's the freaky voice of David Bowie or the imitable sounds of the Pet Shop Boys lamenting life on the mean streets, the songs are pretty right on and always funny, but sometimes, you know, they could be a little shorter. .. but why quibble over small imperfections? It's a fun show made by people that seem genuinely nice, so enjoy it!

I'll start by getting the unfair comparisons out of the way: Gold Diggers of 1935 is no Gold Diggers of 1933. Spending time with sassy chorus girls is far more fun than passing a couple of hours with a miserly rich family and, despite impressive large scale unison tapping, meat cleaver-based choreography, and oscillating pianos, none of the grand Busby Berkeley numbers here quite compare to the mythical Pettin' in the Park or Remember My Forgotten Man – though Lullaby of Broadway is pretty fantastic.

But comparisons are unfair – Gold Diggers of 1933 is a perfect movie, my favorite of the era's genre and impossible to match, but that doesn't mean that the (kind of, sort of) sequel isn't great fun.

1935 holds almost no resemblance to the first movie except that we see Dick Powell again, only instead of a wealthy 'juvenile' with big song and dance dreams, he's a summers-only hotel clerk on his way to becoming a doctor. He falls in love with Ann Prentiss, the buttoned-up daughter of a stingy millionairess who is unhappily engaged to the film's most confusing and intriguing character, T. Mosely Thorpe III.

Also extremely wealthy, Thorpe is a happy-looking, Ben Gazzara type and exactly what's wrong with him is unclear. He rides around in a chauffeured car with an emblem of his face surrounded by thorns, he's obsessed, seemingly to an autistic degree, with snuff, and at time appears either mentally handicapped or amnesiac – sometimes both.

Musical shopping sprees and charityshows take center stage, which is more than alright with me, in this breezy, wacky, fun-loving musical. Watch for the amazing outfits worn by Thorpe's scheming typist.

TV Shows »Who Put the M in Manchester

Who Put the M in Manchester? Clearly the answer is Morrissey. Performing on his forty-fifth birthday (“I can't believe I'm 29” he quips to the audience, as charmingly as ever), Morrissey seems to be paying homage to fellow crooner Elvis Presley's 1968 comeback special with the stage set consisting of his solely his name, huge in lights.

Experiencing a comeback of his own at the time of the concert, Morrissey begins the show with my favorite song from his career altering album You are The Quarry (First of the Gang to Die). He also performs several songs from the excellent Viva Hate. You can watch the entire performance on instant Netflix.

There's not much information on the mid-eighties Telugu film Adavi Donga starring Chiranjeevi and Radha and a slew of dancers donning paper mache animal heads, but I am greatly intrigued.. especially since this is the only other image online for the film.

Laughs »Trapped in the Closet Videos

Unfortunately these are no longer available on the R. Kelly website. There is too much money to be made in DVD sales. I probably don't have to tell you how amazing this is, as it has become somewhat of a weird pop culture phenomenon. But if you have missed it, do yourself a favor and take a look.