This one’s for all the fellow nerd lovers out there, classic oldies edition. Chad and Jeremy, the folk duo whose mellow, lovely songs include Willow Weep For Me, Yesterday’s Gone, and A Summer Song were never as big as the Beatles though they possessed the fun loving, floppy haired moppetness of the foursome.

Sporting perfect square glasses, corduroy, turtlenecks, professor blazers, thin ties, well fitting suits, and adorable non threatening smiles, these are boys that girls could dream of meeting and bringing home to mom. Nowadays, you could day dream of The Sartorialist possibly nabbing a shot of them during your date too.

They found there way onto television and made appearances on, among other shows, The Dating Game (which Jeremy won) and the excellent Batman series. Chad also voiced the vulture in The Jungle Book. Following in the TV tradition, Chad’s son is James Patrick Stuart, a character actor with leading man looks. 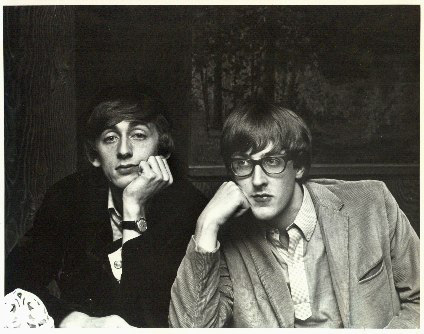