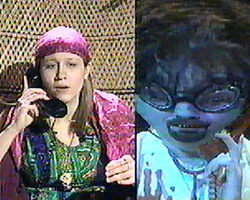 One of the great things about my new job (besides browsing the stock image site we use with the adult filter turned off – which has been yielding a lot of semi-erotic scantily clad moms-to-be and Santa’s helpers this month) is the amount of time I get to spend Google image searching. I don’t care what you’re looking for, after about page 18 you’re going to start getting pictures that have absolutely nothing to do with what you’re actually trying to find. Following these weird images down crazy rabbit holes can be a great way to discover sites like Son of San Guinary.

It’s the home page of an Omaha monster movie show called Creature Feature that was cancelled back in 2003. A Z-level horror movie anthology, the original Creature Feature ran from 1971 to 1982 on KMTV and was a big hit back in the day when locally produced shows like this ruled the Saturday night airwaves. Alas, syndicated sitcoms soon replaced the crazy hosts and it was years before quality programs like She Spies stole back the airwaves.

Son of San Guinary sought to mine the Nebraskan TV audience’s nostalgia for the good old days of Saturday night television – but I think it’s a whole new game since the razor sharp MST3K metasized the bygone world of late night movies. Anyway, it’s not so much the show that caught my attention, but the crazy images. Here’s an awesome gallery of screen shots from the show itself; but it’s these stills of from the horror movies (located in the ARGHives) are truly something else. Hauntingly beautiful in the same way the Beast from Space trailer is (thanks again, Matthew), these lo fi effects are some of my favorite things on the internets – not because they’re cheesy (though it’s easy to feel that way once you notice the site’s background image), but because they’re actually unnerving.