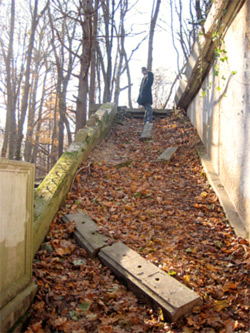 Composed of over 550 acres, the largest natural preserve on this half of Long Island boasts a well preserved estate and plenty of equestrian paths, but by far the most interesting portion of the park is the ruins of King Zog’s castle.

The deposed Albanian king bought the 60 room mansion (and walled garden –which is now hauntingly overgrown) known as Knollwood back in 1951. Since Zog fled with a substantial portion of Albania’s gold and jewels in his possession, local yokes and adventurers assumed he must of hidden great wealth in the walls of his newly purchased property. So, while Zog was negotiating with the US government to obtain citizenship for his 120 person court (which ended up being a no go, Zog settled in France), treasure hunters looted the home, inflicting so much damage that the building had to be demolished in 1959.