Drinks »Spindrift Sparkling Half and Half A Fresh Take on Sodas

Arnold Palmers can be sparkling? I gave out an audible squeal when I saw the answer was yes.

Sprindrift makes a carbonated version of one of the most satisfying drinks known to man.

But beware, this one, though heather than regular soda, not for those with a wimpy sweet tooth.

I found it at the Meat Hook. Everyone knows I’m pregnant the first meal out when I forgo the cocktail.

It’s a fair enough vice to give up for the health of my little one, but I’ll admit there are times I’d love a drink.

Dead friends Astrid and Marcus, sensitive to this dilemma, bought me a wonderful bottle of Wolffer Verjus.

This non alcoholic beverage, which is a lovely mixed with sparkling water, and resembles a dry white wine makes me feel like I’m enjoying a spritzer along with my wine guzzling friends.

Not sure if ingredients, the machine, or the dude working the latte are to praise, but it was very satisfying on a dreary day. Even if it was decaf.

Swedish sweets can also be found here as well as tea. I crave lemonade iced tea year round but that doesn’t mean I can find it in the dead of (even an unseasonably mild) winter.

I am happy to have found a powdered version that tastes yummy and Fruit Blooms‘ natural flavors and certified organic status doesn’t make me feel too white trash (or is the association of powdered drinks and trashy just a derogatory thing I made up?) Just when you thought the neighborhood couldn’t take another coffee shop, one pops up that’s become my go to. Other great additions include an intimate wine bar,

a huge beer hall that’s kid friendly, and the spot that would easily win for the strangest interior (which I’ve learned since also has a fabulous brunch).

For staying in, one of the choicest local breweries got into the can business and a bottle of iced coffee concentrate saved many a mornings for me.

Friends and I agree, Troost is a very pleasant place. Everything is just right and unobtrusive. The lighting is dim but not too dark, the service is extremely helpful (even offering sips of wines to taste) but not pushy, even the music is just the right volume and nice and jazzy without being disruptive.

A very nice addition to the neighborhood, Troost offers a spot to relax with cava or wine without battling a scene. The list of wines and beers is short but carefully selected and impressive.

I am looking forward to trying both their daytime coffee and the delicious sounding menu of small plates, sandwiches, meats and cheeses.

Seven bucks for two beers? Whaaa? Maybe I just haven’t been to happy hour in awhile but the price is right at the Second Chance Saloon, a dark, divey yet homey spot.

One pool table (occupied by serious players with their own stick carriers and everything) takes up the rear of the bar but there’s plenty of seating, a CSI ping pong table, a juke box and Americas Funniest Home Videos playing on the TV which is way better than sports because conversations are only disrupted by a man breast feeding a kitten.

Good beer selection and a pretty friendly environment. Seems like new bars are popping up all over the area and this ones nice and laid back, open to all sorts with a local hang out feel. I have to hand it to the Sixpoint guys. I am not one to order a pumpkin ale, but I just tried their seasonal Autumnation version and it’s got to be one of the most crisp, refreshing pumpkin spiced beers I’ve had.

It’s described as bold hop flavor on other sites, which has me rethinking my negative stance on hoppy beers. Hmmm

And, it packs a punch, whoooo. I always thought blood oranges differed from their more common brethren in looks only (silly me) but this Italian Organic bottle of blood orange juice has me rethinking that assumption.

I’m not a huge oj fan but have loved pouring this over seltzer for lunch. It almost tastes like raspberries. Not since Wakatake have I fallen so in love with a sake. Eiko Fuji, like Wakatake was introduced to me by the ever excellent Zenkichi (the photo is a hand written reminder from the waiter).

It has the most pleasant scent and a pillowy, lush and almost creamy taste before ending cleanly.

It’s far more delicate than most namas (unpasteurized sake) we’ve tried and I hope I can wrangle up a bottle for a future special occasion. 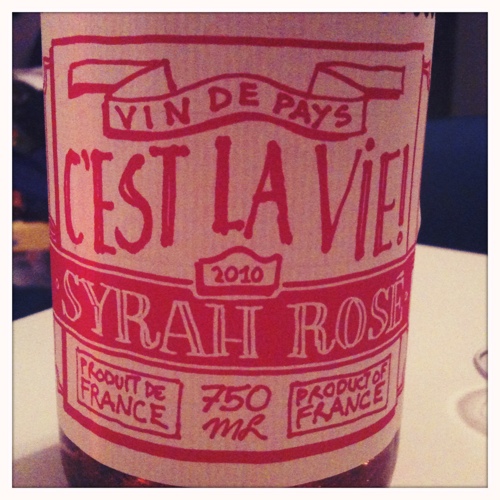 The weather is telling me that summer is over, so does that mean I have to stop sipping rose? Not while I have a bottle of Cest la Vie in the fridge!

Dry yet fruity but not tart, this syrah rose is cheap and yummy.

A rare excellent find for being the only rose at our closest liquor shop.

Plus, the hand drawn label is darling. The Grady’s Cold Brew stand caught my eye at the recent Smorgasburg. While there are plenty of great local iced coffee options, there is something nice, and more affordable about making a cup at home.

I was pleasantly surprised that this concentrate is as yummy as any good cheap cup of coffee you can find and for $15 it lasts two weeks (well, maybe less than that if you drinks lots of coffee).

Locally, at Brooklyn Kitchen and Urban Rustic, you can return your growler for cash off your next one. An iced hot chocolate is more than an oxymoron – it’s a very special thing.

The pleasant cafe also offered lots of cakes and other chocolate treats. I know, Sixpoint cans have been on the shelves for a while now so it’s no big scoop I am sharing with you. Still, we think it’s pretty great that we can crack open a Sweet Action at home.

When we attended a Murray’s cheese and Sixpoint beer tasting, the Sixpoint representative was quite the purist, doubting a day would come when they could stand behind a super market product. I am glad that day has come.

But beware! I’ve found the cost of these beauties fluctuates wildly.

Two of the most lasting memories to my taste buds from a recent Minneapolis visit come from the cute, comfy cafe, Crema.

The namesake beverage, crema, was stunningly delicious both in hot and cold form – think of the creamiest coffee ever and add a perfect sweetness.

And if that’s not enough endulgence, you simply can’t leave this place without a scoop of Sonny’s small batch homemade ice creams (yes, even if it means you’ll be having ice cream after brunch).

I went for it and sampled their wildest flavor – pesto – and found it remarkably refreshing and nice in that the herbal taste balanced out the sweet. So yummy I got a big scoop of it.

The backyard is romantic, the staff ultra friendly, and oh yeah, the food here is tasty too.

All you know about Sherry is wrong.

Or, scratch that, all you know about Sherry is right, it is syrupy, weird and usually can be found sitting for decades in a grandmother’s cabinet, BUT there’s so much more to Sherry than that as I found out at a recent Brooklyn Kitchen Sherry Tasting and Class.

Because of age old laws, only over turned in the 1990’s, Sherry makers didn’t have the right to bottle their own goods. Not shockingly these laws were written by distributors who would bottle all the Sherry, adding sugar and other junk and export it to England under names like Harvey’s Bristol Cream.

There’s a new crop of Sherries out there though, the ones we sampled coming from Gutierrez Colosia (and all available at Vine Wine on Lorimer) and they are complex and delicious. My favorite was Oloroso Sangre y Trabajedero (Blood and the Worker). It was the farthest of the bunch from the taste of wine and actually tasted more like a brandy, but not quite.

The room hushed and all were blissing out on the Bodega Cesar Florido Moscatel Especial, a sweet sherry that was heavenly with the gorgonzola dulce they offered.

Most tastings I have been to try to make it a laid back experience, but Brooklyn Kitchen probably does it with the most ease. Black Sabbath was blasting downstairs and everyone in our small class was having a fun time.

I had originally used my generous gift card for a Breakfast Making Class (I was so super excited to learn how to make amazing eggs of all kinds) but it was canceled. I picked this Sherry class because it was something I knew nothing about. I’m glad I did. I know Greenpoint doesn’t need another great place to buy coffee, but we’ve got it with the Manhattan Avenue sliver of a spot Upright Coffee.

The lattes are great and they sell their own beans as well as various baked goods.

A stroll down nearby lovely Milton, Greenpoint’s loveliest street is a nice accompaniment to an eye opening treat.